Just received some confirmation and I'm going to be giving away some AWESOME signed books next week so ... just wanted to give you guys a heads up on my Contest-o'-AWESOME that's going to start on MONDAY, MAY 3!!!

I'll see you back here then! Woohoo! (I love contests!!)

Have a great weekend everyone! (And yeah, I know it's Thursday, but I won't be back until Monday!)

Email ThisBlogThis!Share to TwitterShare to FacebookShare to Pinterest
Labels: Contests

We interrupt this time of unplugginess because, well, it's my blog and I can (Lol!) and to share with you a few recent reads because, let's face it, I don't know how to just "rest." (Sorry for the uber-long post.)

Book: The Beautiful Between by Alyssa B. Sheinmel (May 2010)
Count: 20
Genre: YA Contemp Fiction
Connelly Sternin likens her life to a fairytale – with a widowed mother and living in a high-rise apartment, she’s Rapunzel, trapped in a tower by the evilness that is SATs and college applications. But when Jeremy Cole, who she’d deem to be the Crown Prince, sits down beside her at lunch one day, everything she thought she understood about her kingdom begins to unravel. Jeremy knows Connelly’s secret, but before too long, he confides in her one of his own. As their friendship grows, the weight of the truth grows heavy, but the honesty in their story, and their friendship (because that’s all it is) definitely clings on.

Book: As Simple As It Seems by Sarah Weeks (June 2010) - Cover not yet available.
Count: 21
Genre: MG Contemp Fiction
I’d like to premise this with “I thought it was YA” then I started reading and discovered the MC was in the 5th grade. Uh, ok so not so much on the YA thing. So I was a little worried I couldn’t give a fair opinion, but you know what? I totally forgot about this being MG as I got into the story. It was really good. Verbena Colter is a girl who knows she’s bad. She knows she’s trouble and she’s just learned that her parents have kept the reasons why from her since she was a baby. She wishes she were someone else, and when she meets Pooch, a boy visiting for the summer, Verbie takes the opportunity to be someone else. A cute story about self-discovery and seeing things from someone else’s perspective.

Book: Winter Longing by Tricia Mills (August 2010)
Count: 22
Genre: YA Contemp Fiction
Winter’s been in love with Spencer just about her entire life. The day after she fesses up, and he admits his mutual feelings, Spencer’s killed in a terrible accident, leaving Winter longing for what could’ve been. Wow. That’s all I have to say. This book was emotional and raw and real and A. MAY. ZING! I loved it. Learning to live without someone you love is something everyone goes through in some way, shape or form, but this story adds in so much of what might’ve been, but also reminds you not to forget that life is still filled with what could bes.
Book: The Extraordinary Secrets of April, May & June by Robin Benway (August 2010)

Count: 23
Genre: YA Paranormal Fiction
Three sisters (Yes, they would be the April, May and June in the title) are now part of the statistic: their parents just got divorced. When they move to a new place with their mom, they suddenly discover that maybe they’re more different than the thought. April begins seeing visions of the future. May can disappear, literally. And June can read everyone’s minds. Told from alternating perspectives, this was a great story of sibling relationships while navigating through high school and learning that being different can also mean being extraordinary.
So I'm off to do some more "resting." Hoping to be back soon!
Happy Reading!!
Posted by Windy at 7:00 AM 2 comments:

It seems to just be one of those times in my life right now... If I stretch any thinner I'll disappear completely, so although that would be a fantastical new element to add to my bag o' tricks, I think I (and my family) would rather I stayed at least somewhat visible.

Usually when I've gone unplugged, I've stuck to the weeklong thing, but this might take a little longer to sort out. I'll be back as soon as I am able. 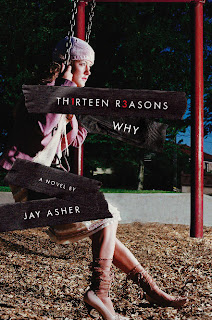 Book: 13 Reasons Why by Jay Asher
Count: 18
Genre: YA Contemporary
Hannah Baker killed herself and now Clay Jensen has a mysterious box of tapes sitting on his front porch, waiting for him when he gets home from school. When he starts to listen to them, he finds himself taking a tour of the town he once thought he knew, but seeing it through a different set of eyes, seeing it from Hannah's perspective and figuring out his part in her suicide, what number he is in her 13 reasons why she did it. Thought provoking and definitely a story that shows what the domino effect a single rumor can cause. Makes you remember that with just a few words, you can change a life.

Book: Season of Eden by J.M. Warwick
Count: 19
Genre: YA Contemporary
Beautiful, popular Eden is looking for an easy A when she signs up for Concert Choir her last semester of high school. Instead, she ends up trying to work out her feelings for the young, handsome new teacher, Mr. Christian, and the feelings he seems to have in return. Intriguing premise: teacher/student relationship and just how far will it go? I just wish Eden had more depth to her. She felt very flat to me, and as the main character, that really made the story hard for me to get through. There were some great, scenes woven throughout the book, exchanges between Eden and Mr. Christian's mother and Eden with her dad, but there wasn't enough to tie things together to make the story whole. I wanted more depth, more clarity, just more.
Posted by Windy at 7:00 AM 12 comments: 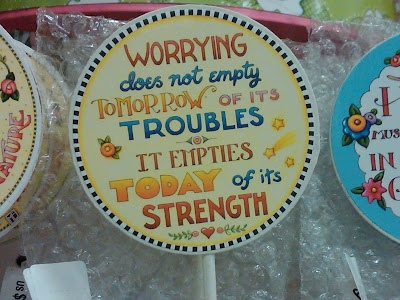 Email ThisBlogThis!Share to TwitterShare to FacebookShare to Pinterest
Labels: Quote of the Week

I know I said I'd be around a bit more - well, at least try to be around a bit more, but this whole health thing is totally kicking my butt. I have been trying to get to blog posts and make comments and stuff, but as for my updates on here, they may continue to be pretty sporadic for the next couple of weeks as the docs and I try to figure out what is really wrong with me.
In the meantime, have some cupcakes and celebrate with me! 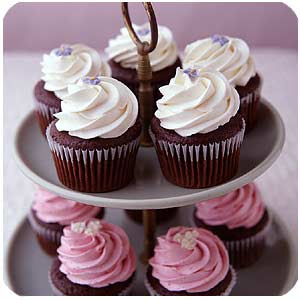 For today is new Washer & Dryer delivery day! You know what that means? Dancing and singing and detergent swirling and energy efficient sudsing and fresh, warm Downey scented clothes straight from the dryer! I've never been so excited to do the laundry before, but after 8 months of hauling our clothes off to the laundromat, this has been A. LONG. TIME. COMING.
By Monday the enthusiasm may have worn off, but for now, I'm riding the high of new laundry wave - literally. (Clothes tend to build up when you have two kids under 5!)
Have a great weekend everyone!
Posted by Windy at 7:45 AM 5 comments: 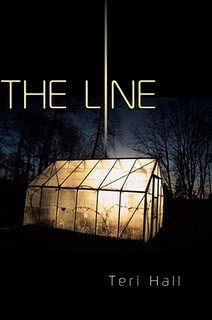 Book: The Line by Terri Hall
Book Count: 15
Genre: YA Dystopian
Rachel grew up living next to the Line, the US government installed fence that separates the good, law abiding citizens of the US with those from Away. But when she discovers a recording that seems to have drifted through the impenetrable Line, pleading for help, she knows she can't turn her back. Disclaimer: I don't usually read this genre. I really liked the premise and the overall story arc and that was what drew me in. Now, there was a fair bit of headhopping - at one point I counted five different perspectives I was getting, and it grew confusing, but once I got past that, I actually wanted more. I wished the book was longer and let me spend a bit more time with the different characters. 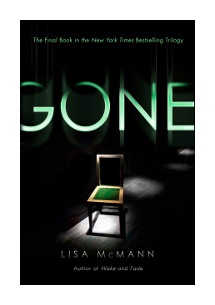 Book: Gone (book 3 in Wake trilogy) by Lisa McMann
Book Count: 16
Genre: YA Paranormal
Okay, who doesn't love themselves a little bit of Cabel Strumheller? Now that we've got that out of the way ... so this is the last book following Janie, who's a dreamcatcher, stepping into people's dreams when they happen to fall asleep when she's nearby. After all the events that happened in the Fade (book 2), Janie's just looking for some time to relax. But when she gets an emergency call, her entire life changes. Janie meets the mystery man from her mother's dreams and she ends up with a choice to make. It's nice to read the finale in a trilogy that gives you enough closure to nod and smile, but still makes you wonder of the possiblities that lay ahead for those characters. My only complaint? Not enough Cabel, duh. ;) 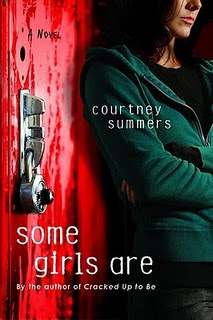 Book: Some Girls Are by Courtney Summers
Book Count: 17
Genre: YA Contemporary
This book was like the Mean Girls movie. But meaner. When something horrific happens at a party and someone twists the truth, Regina suddenly finds herself frozen out from the Fearsome Five, the most popular--and powerful--girls in school. Now facing a student body she once helped torment, Regina's fending for herself, accused of betraying her friends, realizing the destruction she's wreaked as part of the Fearsome Five, and, for the first time in her life, understanding her own true fears. Dark and emotional, it was a little reminder that two wrongs don't make a right. Ten wrongs don't either, even if getting even makes you feel better.
Posted by Windy at 7:00 AM 3 comments:

Email ThisBlogThis!Share to TwitterShare to FacebookShare to Pinterest
Labels: Gone, Lisa McMann, Recent Reads, Some Girls Are, The Line

I haven't posted for a week. Sorry. I've been mostly MIA on the interwebz in general. Still struggling with health stuff and if you don't have your health, you haven't got much else, so I've been away trying to get better.

I'll try to be better this week.

On a different note, FINALLY we're finishing up the home renovation project we started, oh, last Labor Day. So, Labor Day to Easter. It finally ended up being forced because I caved and ordered our new washer and dryer and now (Yippee!) they are being delivered the end of this week and it was make or break time. I'll post some pics of the finished work soon as we're up and running. And for those of you who forgot, this would be the project that all began because of the previous owner's penchant for Fry Sauce colored walls. (That's a ketchup/mayo mix in case you're not from Utah.)

I have been reading, though, so keep an eye out for yet more Recent Reads posts later this week.

And oh, I didn't put up a new quote for this week because, well, I truly wanted to reiterate the last one.

Okay, I promise to be more . . . present this week. That's about all I can do. Not sure I can guarantee any entertainment or anything.

So I leave you with this conversation I had with our 22 month old "Mini Kidlet"
(I have a Transformers poster hanging on my office wall, remnants of when office was the playroom, plus I really like Transformers so I haven't bothered to take it down yet.) 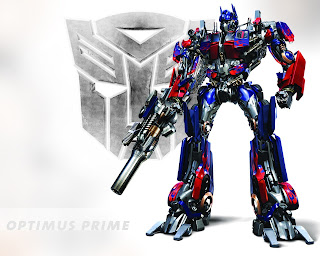 Husband has trained her well.

Have a good day everyone!
Posted by Windy at 9:15 AM 7 comments: