"A true friend never gets in your way, unless you happen to be going down."
Arnold H. Glasow
Posted by Windy Aphayrath at 8:30 AM 5 comments:

Email ThisBlogThis!Share to TwitterShare to FacebookShare to Pinterest
Labels: Friendship, Quote of the Week

1) It took until Thursday for me to realize I hadn't blogged all week. Not even a quote! I'm sorry guys. After the Great Blogger Crash of Friday the 13th coinciding with Sarah Dessen Day (at least in my world) , along with a weekend filled with family and friends and little kids birthday-ing, well, things have been a bit crazy.
2) Speaking of Sarah Dessen Day ... so she was here last Friday at The Kings English in Salt Lake City and it was probably one of the BEST Friday nights ever! She's one of my heroes, you see. A queen of contemporary YA and such a sweet, Southern gal. I'll have my pictures up next week to share!
3) See, now I feel like I need to have 2 weeks worth of random stuff to share, except, I can't remember all the random stuff from last week and even this week's stuff is a bit overshadowed by the INSANE hailstorm that pummeled our house last night. To the point where 5yo woke up and yelled "Mommy! The house is going to fall down!"
4) While the weather may not be cooperating with the whole summer thing, the office is! I came in this morning to an email from Bossman saying we're starting our summer hours next week. What does this mean, you ask? This means, we work a little extra Mon-Thu and get half day Fridays every week! I'm so in.
5) And lastly, I thought I kicked my coffee habit. I hadn't had any for a good long while. Then, at our Laos New Year Festival about three weeks ago, my mom and aunts had a booth selling food, Thai tea and iced coffee and I had a little. Now I feel like I need some every day, though I've been good and have only given into the craving about 3x a week.
*raises cup of iced mocha* Hope your weekend is sunny and bright! (Hope mine is too!)
Posted by Windy Aphayrath at 9:30 AM 6 comments:

It's Wednesday. And I thought I already had a blog post ready, but . . . apparently not.
So bear with my ramblings, his week's a bit crazy for me. One of my colleagues is leaving the company and we have to figure out who and what is going to happen with her work, the little kidlet is turning 3 and having a big family / some friends party on Saturday that I'm totally NOT ready for (as in, I sent out a text message giving everyone a heads up, but I only JUST got the actual invitations in the mail yesterday - pathetic, I know), we've got so much laundry to get done I feel like the mountain of it is going to swallow me whole, and that's just some of the RL stuff.
If we're gonna talk writing, well . . . I've got revisions to work on for wip#1, an overhaul and rewrite of wip#2, and the sort-of-outlined-but-not-really wip#3 characters won't quit talking to me!
Enough rambling and ranting though.
On the bright side, we've got some spring showers right now, but temps are supposed to go as high as 79 this weekend. 79! Yay to warmth and sunshine and summer dresses! Hmm, maybe that's why the characters of wip#3 are talking to me. The story takes place over a summer and, well, they can FEEL the temperatures rising too! 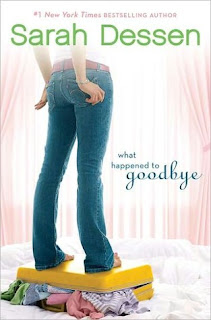 Oh, and let's not forget what Friday is. Well, for some, I guess it's just Friday, other's it's Friday the 13th. For me? It's what I have officially deemed SARAH DESSEN DAY! She'll be in Salt Lake on tour for her new book WHAT HAPPENED TO GOODBYE. I'm so so sooooooo excited. My sister and one of Husband's cousins (both still teens) are going with me and I think my fangirly-ness might freak them out a bit, but yanno, I don't think I care. IT'S SARAH DESSEN!!!!!!
In the meantime, until SARAH DESSEN DAY arrives, I suppose I better go prioritize or something. Maybe I'll make a list. I do love a good list.
How about you guys? What's up on this springy Wednesday?
Posted by Windy Aphayrath at 9:00 AM 4 comments:

"You can't always get the perfect moment. Sometimes,
you just have to do the best you can under the circumstances."
Sarah Dessen
Posted by Windy Aphayrath at 9:00 AM 6 comments:

Email ThisBlogThis!Share to TwitterShare to FacebookShare to Pinterest
Labels: Quote of the Week, Sarah Dessen

1. Okay, hi. I meant to write this yesterday after I'd collected a week's worth of random stuff, but then ... well, Husband was home and we watched Sons of Anarchy on Netflix instead.
2. Speaking of Sons of Anarchy ... it's an HBO series (I think), so with it comes all the HBO-ness of the show, but that aside, (and one of my dear friends told me this way before I watched it) holy Samcro, this show has fantastic writing, an amazing cast of dynamic characters ... and Jax ... well, isn't he just one of the hottest bad boys with a heart of gold out there?
3. Now then, moving on. I have this kidlet birthday party dilemma. We have a 2yo and 5yo, who will - in the next 45 days - both be turning into 3yo and 6yo respectively. That's not the dilemma (though with the tantrums, sometimes I think it is). The dilemma is the type of birthday party to throw. At home birthday parties are fun and can be low key and your guest list doesn't have to be too limited. Location birthday parties (i.e. Chuck E. Cheese, anyone? ... etc) are easy - no stress over house cleaning, decorating etc. The problem? Well, my family is chock full of kidlets in the same age bracket as ours, but Husband's family has only 1 kidlet under the age of 10, the rest of them are in high school and older. If we do a kidlet party, then Husband's family is virtually excluded. If we do an at home family party, well that's just exhausting and a million people to feed ... because we are both really close to both our extended families so they would all be invited. So what's a girl to do?
4. On a completely separate note ... Sarah Dessen is going to be in Salt Lake City next week. Can I just say she is amongst the several proverbial yardsticks by which I measure myself? She's so kickass and I've been reading her books for years and am uber-excited to meet her! Anyone else in the area planning on going?
5. I have really white legs. Like, they do not tan, they do not burn, they're just a not so healthy looking, very very pasty white. Year round. This is why if you've ever met me, you'll notice everything I wear - even in the summer - is at least mid-calf in length. It's not because I'm that modest. And yes, I know tanning, tanning. I'm sort of paranoid about sun exposure, so, yeah. Tanning has never really been for me. But! Yes there's a but here ... this year I've already seen so many super cute little sundresses that I've caved. No, I'm not laying out or going into the tanning beds or spray tan booths. I've started using the not as harsh Jergens Natural Glow. It's only been a week, but wow, I'm not nearly as pasty as I was. Plus, it's a nice moisturizer and I can just sunblock over it - again with the sun exposure paranoia.
I'm off to do some sundress shopping this weekend, in the hopes that it will help keep the weather warm and chase away the lingering bits of winter that seem to be clinging on. Have a great weekend everyone!
Posted by Windy Aphayrath at 9:00 AM 4 comments:

It's just after 1 A.M. as I write this blog post, having just been awoken for the umpteenth time by our almost 3yo. This is what happens when you have a toddler who doesn't like the whole "Your room is over there, this is my room. can i have my bed back?"
Anywho, this is the third night in a row that I haven't slept very well, so instead of lying in the dark not sleeping, I figured I'd turn on my computer and, yanno, do something. But what??
Firstly, I realized I hadn't written a blog post yet, and I'm trying not to be too much of a slacker on this attempted comeback from the grips of not so fun illness. So here you are. Second, I know I could always read to try to go back to sleep, I mean, I have a stack of books on my TBR pile, but nothing was really screaming out at me and I'm one of those people who need to be in just the right mood to read. And well, that leaves me here. Staring at this blog post wondering what I am going to do to try to get myself back to sleep.
Oh, and I'd write or revise or something, but my brain's at that point of exhaustion where thoughts may or may not be completely coherent and I'm not sure how functional my eyes really are right now - things are still a little fuzzy. Though that could be a really interesting beginning of a new story, hmmm . . .
So what do you guys do when you can't sleep?
Read? Write? Revise? Eat? Watch TV? Stare at the abyss-like blackness of your dark ceiling until the shadows swallow you up?
Posted by Windy Aphayrath at 6:00 AM 7 comments:

So, as I quoted on Monday, Hi! *waves*
I feel a little guilty about having completely dropped off the grid with no warning, but sometimes that's just the way things go, right?
I've been sick for a few weeks and it's totally thrown me for a loop. But I'm finally getting better and starting back in on some reading, some writing and hopefully I'll be back to blogging a bit more regularly.
Oh, how I have missed everyone, I must say. I've tried to keep up where I could, when I had time and attention span. So if I've missed you, I apologize and hope to be around a bit more.
Something one of my friends said to me really hit home as I've been dealing with this whole lack of blogging, no attention span and feeling like crap stuff, and that is, sometimes it just becomes too much and you have to just stop. I knew if I wrote a blog post saying I was taking a break, I'd end up not taking a break out of guilt, but mostly I didn't even have the energy to write that simple blog post. Sort of sad and pathetic, I know.
Sorry for the ramblyness of this post, I'm still working on getting my bloggerly groove back! Have a great day!
Posted by Windy Aphayrath at 6:00 AM 6 comments:

"Hi. How ya' doing?"
Flynn Rider (Disney's Tangled)
Posted by Windy Aphayrath at 6:00 AM 4 comments: